The Messengers Luth a.s Prohet Luth a.s had been trying to make saduum people who had poor morality,conscious. He didn’t think it’s no used asking them back to the right way. They’d already to far from Allah swt. And live in sin and low morality.

The two young handsome men meat a girl whoi as Prohet Luth’s daughter.
“excuse me , can you show us, where luth’s house is ? “ the young man asked.
“Sure … He’s my father , what ‘s up ?” a girl lasked curiously.

“We wish to spend our night at his place!’ another young man answered.
A girl said no words for a minute, she worried that something bad will happen to her father. She worried about the safety her family and the two men
“you’d better stay here, I’ll tell my father about this “
A girl Rapidly left them.

When she got home, she told everything to the father.
“father ,I just met two handsome men , they wanted to see you “
“prophet Luth a.s Kept silent for a while , he worried something bad would happened to his guest.
Since he was faithful, he left tehm come to see him.
Prohet Luth a.s prayed to Allah swt. Asked for guidance. 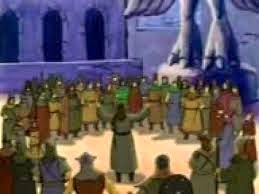 “ya , Allah , it’s hard day , give us your blesss.”
Prohet Luth a.s took his guests home silently.He warned them about dangerous situation might be threatened them.

Suddenly…..
“Hey, Luth, Just give us those youn man , otherwiase you will be in danger!’ A man shireked.
“ That’s right luth, we want those men!” people got wilder outside
And then Prohet Luth a.s shut the door and locked it by stalks.

This site uses Akismet to reduce spam. Learn how your comment data is processed.